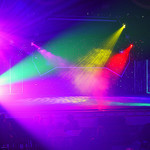 Involved in stage lighting? This is your group...discussions, reviews, recommendations whatever you like - if you have a question, post it in the discussion forum to get maximum exposure.

You need to be a member of :stage lighting to add comments!

I was very pleased to be able to chair an introductory meeting yesterday between PLASA and the Carbon Trust. The meeting was organised by :entertaining sustainability to begin to explore ways that ground-breaking, lower-energy products can be promoted and incentivised in a way more on par with their commercial counterparts in, for example, retail and commercial sectors.

The meeting took place at London's Shaftesbury Theatre, and also included representatives from some of the concerned organisations, including White Light, A.C. Entertainment Technologies and ETC. We'll keep you up to date here and elsewhere on how things progress....

Sales and hire company White Light are making some room in their warehouse by having an online sale of some of the kit that's now surplus to requirements. MD Bryan Raven explains the how, where and why here....

I see that a company called Lites will be exhibiting an LED HPL retrofit lamp on their stand at PLASA London. Could be interesting on a number of levels - particularly for all those ETC Source Fours used architecturally....

ETC’s Selador Desire line of luminaires changed the way designers think of LED lighting. Unlike the digitized, artificial look that LEDs were known for, Desire luminaires produce high-quality, beautiful light that even the most exacting designers can put front and center in their designs. Desire fixtures have made their home in indoor and outdoor applications for theater, architecture, touring and broadcast. And now even more venues can have superior lighting, with the introduction of the D22 luminaire, which packs the power of the Desire line into a miniature footprint that fits any design and any budget.

Thanks to the debut of the D22, the Desire family now includes three sizes of LED luminaires to cover every lighting task: the ultra-bright D60, the versatile D40 and the compact D22. The eight-inch, seven-pound D22 brings efficient wash lighting to cafetoriums, children’s theaters, museums, lobbies, retail outlets and other installations where low-profile fixtures are a must. It’s also the perfect detail light for any professional venue. “The D22 might be small in size, but it’s big in functionality,” says ETC Fixtures Product Manager Jim Uphoff. “It has the same quality color mixing, smooth dimming, intuitive user interface and stand-alone operation that the Desire line is known for.”

The D22 features the color rendering that only Selador® luminaires can accomplish. The D22 Lustr+ array is based on the x7 Color System™, which uses up to seven different LED colors to generate fuller, more spectrally balanced light. “The Lustr+ array is the most flexible in the Desire family,” says ETC Entertainment Market Manager Matt Armendariz-Kerr. “It can create a nearly unlimited range of color, from adjustable whites and subtle pastels, to vibrant, eye-catching colors. And the D22’s Studio Tungsten and Studio Daylight arrays craft stunningly bright, color-spectrum-specific white light that looks great on camera and in person.” Later this year, ETC will add a fourth D22 array, Studio HD, which produces high-definition white light with variable color temperatures.

The Desire line offers solutions for temporary and permanent applications, and there are D22 versions for both. The canopy-mount and track-mount D22 models are reliable and durable, providing spectacular light over time. “The Desire family’s easy setup makes the portable D22 a smart choice for short-term projects, for busy venues with constantly changing light plots, or for adding the last striking detail to a lighting look,” explains Armendariz-Kerr.

John Gorse, technical marketing manager at Philips, has gone some way to allaying lighting designers' fears about the disappearance of tungsten theatre lamps, as he explains in this article in The Stage.

Stage lighting in the UK appears to account for only around 9% of a large theatre's energy use (source: Mayor of London's Green Theatre Plan), and :entertaining sustainability has backed the 'Save Tungsten' campaign, as detailed in this blog post.

White Light have announced that they will be showcasing a variety of LED fixtures at PLASA Focus in Leeds in a fortnight's time.

On display from US manufacturer, Altman Lighting will be the LED SpectraCyc fixture (previously seen in the Broadway production of Spiderman) and the ME3, a high-efficiency 25 watt LED ellipsoidal fixture with 20-40 degree zoom lens.

The Elidy, Chromlech’s unique sculptural LED panel, will also be on display to visitors. The unit combines high-output warm-white LEDs with custom optics that generate extremely narrow beams of light, giving a directional output that far exceeds the intensity of standard LED screens.

PLASA Focus takes place on the 31st April and 1st May 2013 at the Royal Armouries in Leeds.

A Special Report will appear on entertainingsustainability.com shortly afterwards. 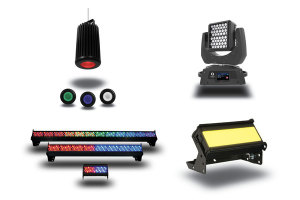 The Inspire house light is a powerful multi-purpose creative lighting tool that provides a choice of beautiful whites, soft pastels and bold saturates – all from one fixture. With fully homogenised colour mixing and a choice of three different lens options, the Inspire provides an excellent selection of stunning mixed colours and 'true' whites, with no unsightly colour separation shadows. It also features an energy-efficient compact LED design providing reduced maintenance and running costs.

A selection of other Chroma-Q intelligent LED lighting products will also be on show including the award-winning Studio Force Phosphor™ and standard Studio Force™ white lighting ranges, as well as the hugely popular Color Force™ range of RGBA colour fixtures. 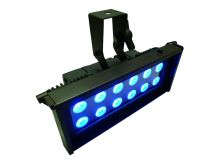 The vibrant range of luminaires can be found in Hall 11, Stand D73 and includes Philips Showline's 4-foot SL BAR 640 and 6-foot SL BAR 660 linear wash luminaires. Both deliver exceptional light output and can be used as a wash or as a direct-view linear bar.

Joining them will be the SL BAR 520 - a two-foot RGBW linear wash luminaire that produces over 8000 lumens of output with six standard 8° lenses. In addition high-resolution pixel mapping control and a unique locking system allows for quick connecting of multiple units both vertically and horizontally while retaining perfectly even pixel pitch.

Launching at Prolight+ Sound, the extra rugged, compact, 4-in-1 RGBW LED SL BAND 310, offers exceptional light output and incredible color definition at a stunningly bright 2400 lumens of output and 23° beam angle. The blended color output ensures smooth color mixing whether projecting on a surface or illuminating an audience. The compact size utilises an internal power supply, so no external supplies or cables are required.

All of these Showline luminaires feature Harmonize Color Calibration, intuitive LCD menu system, stand-alone abilities, RDM capabilities and other standard features. Additionally a totally new Showline product with unprecedented output and capabilities will be revealed at the Prolight + Sound show.

"Showline is an exciting addition to the Philips family," said Brad Schiller, Showline product marketing manager. "In the development of the complete product family, we have taken our time to ensure that all Showline products integrate into a seamless package of useful and reliable LED luminaires. For example, all Showline products utilise homogenized RGBW LEDs, built in effects, color calibration, and many more features never before offered on LED luminaires. So whether used in wash or a direct-view application, Showline luminaires will add to any production."

Prolight + Sound will be taking place at the Messe exhibition centre in Frankfurt from 10-13 April in Hall 11, stand no D73.

A new culture complex in the southeast of Holland has decided that energy-saving is the way forward and has chosen LED stage-lighting fixtures by ETC. The ECI Cultuurfabriek is a converted former chemical factory in the city of Roermond. Abandoned in the 1970s, the building has since been rehabilitated and transformed into a cultural center for the community. Incoming technical manager Maarten Janssen invested in 30 ETC Source Four Lustr+™ and 22 ETC Selador Desire Lustr+™ LED luminaires for the 244-seat theater space, taking advantage of funding available for environmentally-sustainable projects.

“I saw the LED demonstrations on ETC’s YouTube video library,” says Janssen, explaining how he came to select the LEDs. “The ETC fixtures have incredibly smooth fades, which I’ve never seen in any other LED fixture. And the range of colors is impressive.”

“At the beginning, visiting theater groups are suspicious of the capabilities of LED. But as soon as they see the power and versatility of these fixtures, they never fail to be impressed. I always discuss with them why the seven-color LED system is better than any RGB system, and they always leave with a big smile. The Source Four LED fixtures are just magnificent.”

Shows usually stop at Dutch theaters for one or two nights before they move on, often traveling to 60 or 80 local theaters across the country and bringing only minimal equipment of their own, relying instead on whatever a theater already owns. This can mean a lot of time reprogramming and refocusing. But, says Janssen, “With the ETC LED fixtures – using one unit for all the colors needed, instead of one per color – there’s no need for precious time to be taken up with rigging. Instead, technicians can spend more time working on other aspects of the setup.”

The use of LEDs has been beneficial in helping to keep the room cool, adds Janssen: “For every thousand watts of lighting, we used to have 250W of air conditioning. Now, with almost no heat being emitted by the LEDs, we need far less climate control. Which means less energy usage both by the lights and the air cooling, and the performers are also more comfortable. Plus, of course, there’s less noise.”

Lightco project manager Marnix Kuling, who worked on the installation says: “The process by which Maarten specified the LED fixtures was a long one, in which he needed to garner the support of all types of different people, from technicians to funders. I was pleased to be in a position to supply him with data that would back up his decision-making and could help him prove that the ETC LED fixtures would be the right choice in the long term, both technically and financially.”

The theater also invested in two ETC Ion lighting-control desks: one for the theater space and the other for the dance music area, Pop, which can accommodate up to 1,000 people standing. “The freelancers who use the desk have been impressed,” says Janssen. “I took advice from colleagues and the many freelancers whom we use; all were familiar with the ETC style of programming.”

In addition to the theater, the ECI Cultuurfabriek houses a cinema showing arthouse films, and holds regular art, photography and craft exhibitions, as well as courses on the fine arts.