The Greater London Authority (GLA) wants to hear from theatres about the challenges facing small venues in London. Their…Continue

The capital city's mini-group. If you have anything you'd like to bring up, then post it on the discussion board below to get maximum attention.

The Greater London Authority (GLA) wants to hear from theatres about the challenges facing small venues in London. Their…Continue

You need to be a member of :london to add comments!

Comment by entsust.com on December 19, 2013 at 23:38
Around 81 people hurt, 7 seriously, after an apparent ceiling collapse at the Apollo Theatre Shaftesbury Avenue. There is no indication at this time of the cause of the collapse, and City of Westminster Council and London Fire Brigade teams are working to establish the stability of the structure.

The theatre opened in 1901, and is under the management of NIMAX theatres. A major incident was declared by the emergency services. Buses were used to convey audience members of The Curious Incident of the Dog in the Night Time to hospital.

The ceiling area affected has been named as 'heavy, ornate plastering' by the LFB. The theatre has a seating capacity of around 750, with around 720 reported to be in the audience at the time.

More information on the history and layout of the Apollo Theatre can be found at http://www.theatrestrust.org.uk/resources/theatres/show/2005-apollo...

A new London Assembly report, out today, highlights the difficulties facing small London theatres. The report highlights a number of factors that challenge the viability of venues with 300 seats or less.

These range from insecurity of tenure (more than a third of managers surveyed for the report feared their venues were at risk of sale or change of use) to the urgent need to carry out upgrade works to the building - that the majority could not afford to undertake.

The report calls for the creation of an ambassador for small theatres to report to the Assembly, and in particular for greater co-operation between agencies (such as TfL, the GLA, West End venues and the small theatres themselves) when t comes to advertising and promotion, which most felt was a severely limiting factor.

We'll be doing a special report in the next few days (EDIT - now available here) - in the meantime we'd love to hear your thoughts - not just if you're in London - please add them in the discussion posted above.

Click the link below for the full GLA press release.

Plans for a 77-acre redevelopment in Earls Court and West Kensington have been approved by the Mayor of London. The scheme involves demolishing two estates and the Earls Court Exhibition Centre.

Four of London's worst roads for air pollution pass through the poorest areas of east London, according to the Guardian.

The worst of the lot was the North Circular, which carries 60,000 vehicles a day. Near Walthamstow, four of the five most dangerous road pollutants could be found, including benzene and nitrous oxides.

You can see the full article here...

Comment by Ruth Atkinson on June 20, 2013 at 16:41
Apologies, I tried to post this yesterday and it failed on a whole bunch of levels. Sustainability should be as much about community as it is about energy and environmentalism. To this end the Royal Court in London is currently running writers workshops for the over 80s, crashing down the doors of ageism in playwriting - http://www.royalcourttheatre.com/playwriting/the-studio/the-royal-c... 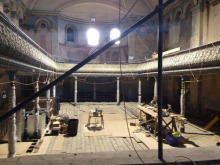 Wilton's Music Hall, the last surviving grand music hall in London, has been awarded a grant of £1.85m by the Heritage Lottery Fund, which effectively sees it saved at last from dereliction.

The total cost of saving the unique venue is put at £2.6m, meaning that the HLF grant meets a significant proportion of the sum. The architectural heritage specialist architects, Tim Ronalds, can now begin work on saving the venue.

Due to complete by 2015, the work will allow the 40% of the building that currently lies derelict to be reopened, and make space for a learning and participation studio.

This exciting new chapter in the life of Wilton’s follows a chequered history that has seen this unique architectural gem transformed from one of London’s earliest music hall venues, home of the original Can Can dance and where stars like such as Champagne Charlie regularly appeared, to become for decades a Methodist mission that retained the name of the Mahogany Bar, serving tea and cocoa instead of ale and porter.

Further reincarnations as a rag warehouse and popular film location, it was saved from destruction in the 1960’s slum clearances by a campaign led by Sir John Betjeman. Having survived fire, two World Wars, riots and strikes, this grand Grand Music Hall is finally receiving the care and attention it deserves.

TfL tries a new tack to lower emissions in the Congestion Charge zone in order to come closer to targets set by the EU - http://www.guardian.co.uk/environment/2013/apr/24/pollution

Prompted by Tim's recent visit to Arcola - just to share that we have a large pile of various bits of wood - offcuts etc, left over from our refurbishment last year and people are welcome to take some. It's been outside for a number of months, so we can't vouch for quality but there is masses. It's in the yard opposite Arcola, give me a call if you're interested - 020 7503 1645